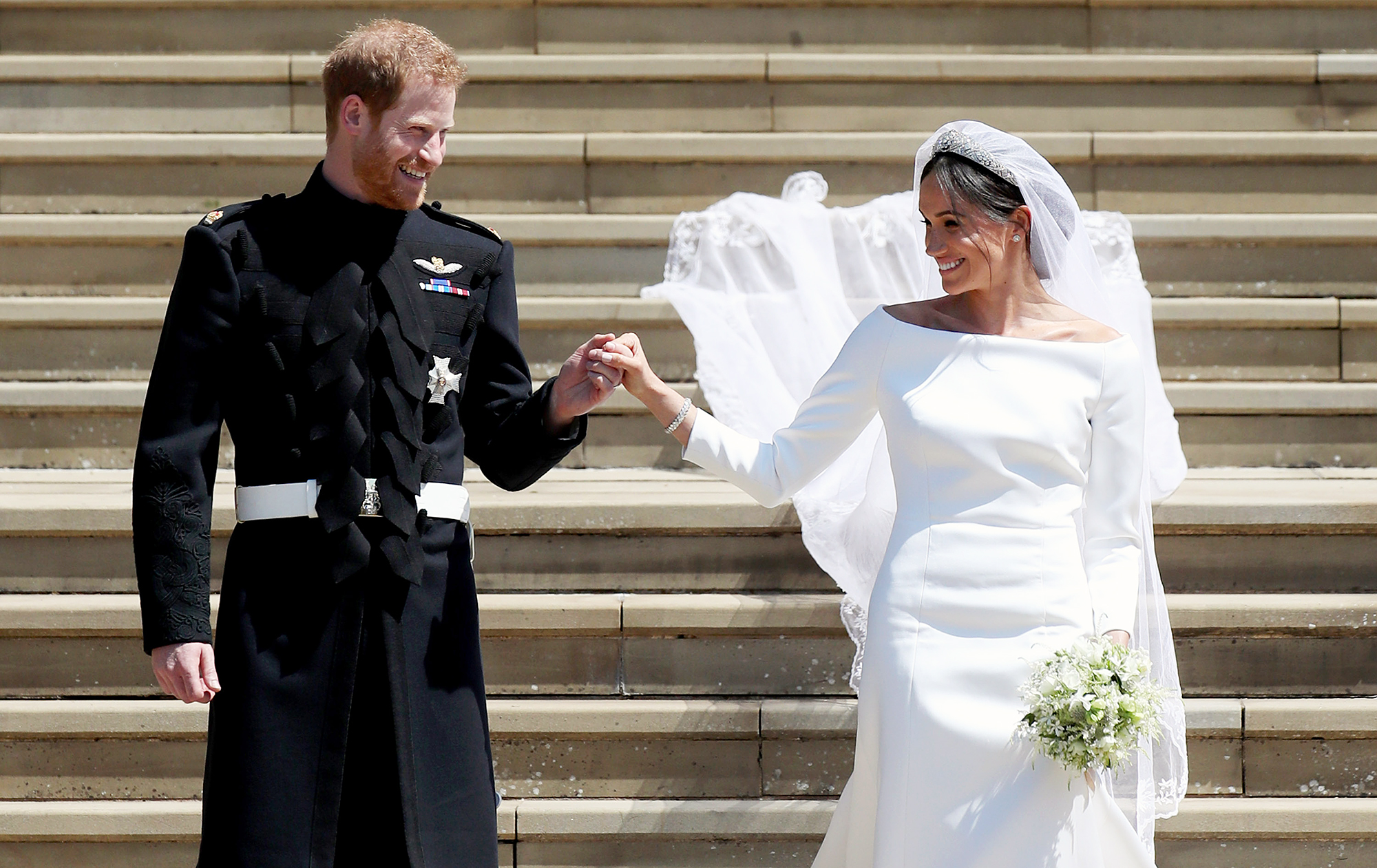 The date a couple is married is like a birth.  I always analyze it as if it were a child being born on that date and what that child’s personality would exhibit.  The following is what this royal couple’s marriage date portends:

The 5th month of the year is associated with the number 5, which attracts a marriage union of those who are energetic and active, have style savvy with a flair for the unconventional, and who bring together an eclectic collection of friends and family members. Theirs will be a wedding that combines creative and memorable concepts designed to make their special day interesting and entertaining for all those present.

The marriage “day” is the 19th and in numerology, that number would be reduced to a 1.  The following are the positives of that day number:

A “One marriage day” denotes a coupling of strong, independent, individualistic people. Both parties in this pairing will have their own style, comfort zone, and convictions, as opposed to one being in deference to the other. Ambitious, determined, self-reliant, and loaded with leadership abilities, this couple would stand out in their community as self-reliant citizens and leaders.

Every date has an “attitude” when related to people.  Prince Harry’s and Meghan Markle’s marriage “attitude” is a 6 and the following offers what that holds for their compatibility throughout their marriage: This is the most loving, caring and responsible of all the “attitudes.”  These people love their home, being parents, nurturing animals and all things of the earth.  They are good neighbors and community citizens. Even though their children, animals, and family members received their priority attention, they also enjoy helping with charitable events and causes they believe in – especially humanitarian causes. They have strong principles and values and sometimes it is difficult for them to understand why others don’t acclimate to their fair and just ways. As giving as they are, they often forget to turn that giving nature onto themselves for some well-deserved rest and relaxation.

Finally, the “destiny number” of their marriage is an 8, a most auspicious destiny number indeed, and very appropriate for this coupling: The number 8 makes this a money-making marriage! This duo will work toward obtaining and gaining the things that are most important to them from a materialistic, artistic, and philosophical standpoint. They will be upstanding citizens who may be honored in their community for their contributions for the good of many.  As an exemplary duo, they are dignified, disciplined, enterprising, and progressive. As parents, they will be principled and pragmatic, inspiring self-confidence and responsibility in their children, along with leadership abilities.

This is a winning marriage date if ever there were one and it is so interesting that it just happens to be the one of this Royal Couple!

WHAT THE NUMBERS SHOW

Prince Henry of Wales, aka Prince Harry, born on September 15, 1984, has a 1 destiny (destiny = full addition of birth date reduced to a single digit).  Meghan Markle, aka Rachel Meghan Markle, born on August 4, 1981, has a 4 destiny.

In my opinion, the destiny number is the most significant for compatibility. I have given it extra points in my compatibility app, CosmicMates,* because it denotes what one is likely to gravitate toward as a lifestyle or career, and spawns an attraction to certain types of people, including lovers and friends, as well as social activities. It also denotes what one would like in his/her surroundings, from people to things. It‘s the strongest motivational force in a numerological chart.

* My app, Cosmic Mates, can be downloaded in iTunes or the Apple Store – under Sally Faubion Concepts.

Cosmic Mates gives this pairing a compatibility score of 61 points, which is on the high side of Level 7, and only 3 points away from Level 8 — the highest level in the app.  That score bodes very well for their marriage being a lifetime “made in heaven” union.  Any couple scoring in Level 7 or 8 is bound to have many common qualities from likes and dislikes to attitudes and philosophies.

After viewing their numerological charts, I would conjecture that they were destined to be together as Harry bestows to Meghan her one karmic challenge which is “paying attention to details” which, I imagine, by becoming the Princess of Wales she will certainly need to accommodate. And, by Harry marrying Meghan, Meghan helps him to fulfill his one and only karmic challenge, which is to be married and have children.  [Aside: The “karmic challenges” denote what one either didn’t accomplish with any dedication or interest in a past life, or avoided altogether.]

Those are not the only pluses of this union. Prince Harry’s “character” number  [derived from his name at birth] is the 99/9 – which denotes a very old soul and also that he has come in this lifetime to help the masses in some fashion or another. That certainly appears to be his inclination from the reports we receive about his humanitarian inclinations. Meghan’s “character” number is the 83/11.  The number 8 imbues her with the ability to be a leader (or Princess) with style and class. The 3 positioned behind the number 8 indicates that she would be charismatic and gregarious in the outside world, expressing herself with style and class.

Finally, the 8 and 3, when added together, become the Master Number 11, a vibration that gives her the gift of elevated intuitive powers, as well as the ability to hold the interest of an audience by her eloquence and charm. This Master Number is known for illuminating its possessor – basically putting Meghan’s name in lights – and in this case – virtually around the world.

Meghan possesses an additional feature that Prince Harry likely delights in, his having been brought up in a world of secrecy and privacy.  Behind the “onstage” scene, she would tend to be very forthright in her responses to questions – delivering “her truth” – likely in a more sophisticated manner than not, but still being very clear about how she feels about this or that, and why.  I’m quite sure that nature would be welcomed by Harry, since he would also have a tendency, with his 1 destiny, desiring to offer his opinions in the same manner, if and when he feels comfortable enough to do so with whomever is listening at the time.

I give this union a 5-star rating. Their charts show me that there will likely be a new little prince or princess appearing on the scene by late 2019 or early 2020, should they be married in the spring of 2018, as is predicted. There are definitely some events that will change their lives for the better in those two years. Meghan’s chart shows that there’s a major shift in her life after her birthday in 2019 and she becomes more content with her life in 2019 and 2020.  Prince Harry’s chart shows that he will be rather profoundly changed, in the positive, by some event that takes place after his birthday in 2019, as well.  So my interpretation of those numbers is that a child will be born in that period.

Book Sally at an Event